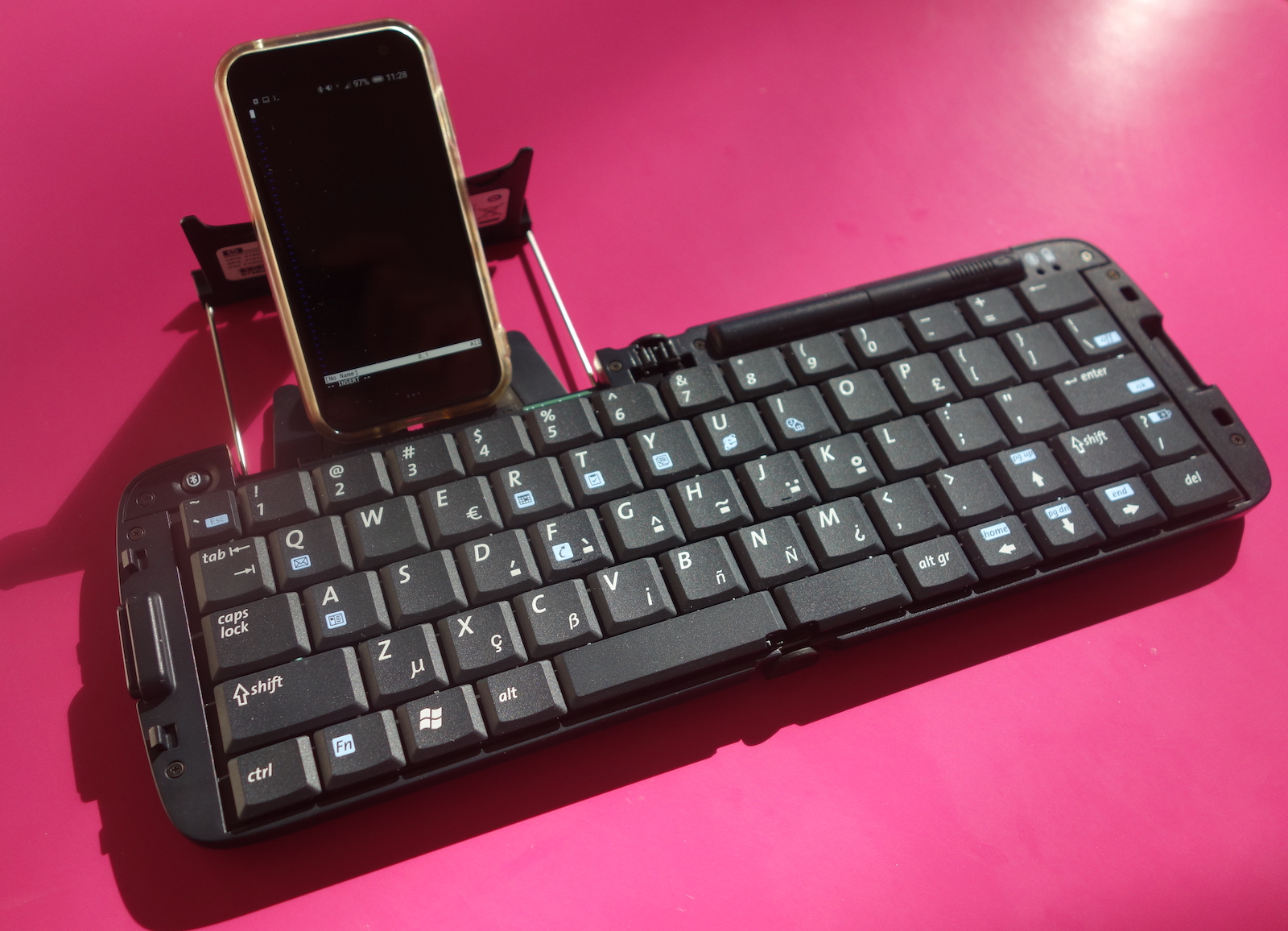 The late 90s and early 2000s saw an explosion of PDA devices (Personal Digital Assistant). This category of consumer hardware tried to bring about mass adoption of mobile computing in the same vein as desktop / laptop personal computers in the 80s and 90s. Initial attempts to market devices like this involved a wholesale migration of existing paradigms in the PC world: operating systems, software and of course, hardware.

HP was one of many PDA manufacturers that released PDA keyboards for more rapid text entry and interaction; the multi-touch capacitive screens and virtual keyboards that are so ubiquitious now were still a decade away. The iPAQ keyboard was a much improved variant of previous PDA keyboards with direct or infrared connections.

The keyboard comes in a well-protected package that folds neatly in half with a robust hinge in the crease. The shell is made out of black ABS and thankfully is a textured matte finish which attracts minimal fingerprints and dirt. You can tell from the construction that this is a PDA accessory that was designed for regular use.

Battery charge and Bluetooth connection statuses are visible as amber LEDs to the right of the layout. To the left, there is a single Bluetooth pairing button which puts the device into active pairing mode. Screws holding the keyboard shell are also proudly on display and make it easy to disassemble the keyboard in case of repairs.

That was highly helpful for this particular unit, since the lower internal hinge plate was broken and had to be replaced. Unscrewing the visible screws made it an easy fix– definitely appreciate the design foresight there.

The design itself seems to have been OEM and the HP iPAQ branded version of the design being the highest quality with the most features. There was at least one other brand, “Freedom Input”, which sold lower spec / fewer featured versions of this folding keyboard.

Pairing was very straightforward. Once the pair button was pressed, the Bluetooth indicator began flashing until the connection process fully succeeded. Keystroke latency was non-noticeable for me; always a good sign. There were multiple competiting protocols for interfacing PDAs with keyboards, two major standards existed: SIP and HID. As far as I know HID won out and thankfully this keyboard uses it so you should have no issues using it with modern devices.

My performance on the keyboard was consistent and accurate across several online typing tests. Speed only suffered slightly vs my desktop / laptop setup (~ 5WPM margin). The keys had decent tactility but still felt somewhat mushier when compared to the ThinkOutside keyboard. That shortcoming was balanced by the presence of dedicated number keys.

Overall, I would say the key feel is better on the ThinkOutside keyboard.

Curiously, there is no power button to switch the keyboard on nor off. The Bluetooth connection does seem to purposefully sever when the keyboard is folded. Likewise when unfolded, the connection is re-established after the first keystroke. Not bad at all!

The iPAQ keyboard is roughly the same size as the ThinkOutside keyboard. The ThinkOutside design is slightly smaller both folded and unfolded in all dimensions, though it sacrifices the dedicated number keys to drop the top row from the layout. Thickness is the same between the two keyboards.

The driver CD-ROM image has been uploaded to Archive.org if for some reason you need drivers for your PDA. All Bluetooth enabled modern devices should be able to detect and pair with the keyboard with no additional setup.

The iPAQ keyboard is a great choice for dedicated mobile typing. Personally, I would be more comfortable using it as the workhorse over the ThinkOutside model. The iPAQ keyboard seems to be easier to find new online (as of 2022), and subsequently, are cheaper as well. You won’t go wrong choosing this as part of your mobile setup!