Over the summer, my obsession with micro-folding bikes came to a head when an auction alert notified me that an original Sinclair Research A-Bike Mk1 was listed. Package looked to be in OK condition and at a fairly good price as far as these discontinued niche products go. Promptly sealed the deal for 60 GBP and a few days later the tiny-wheeled pandemic project was shipped to my front door. This is what it looked like from the listing: 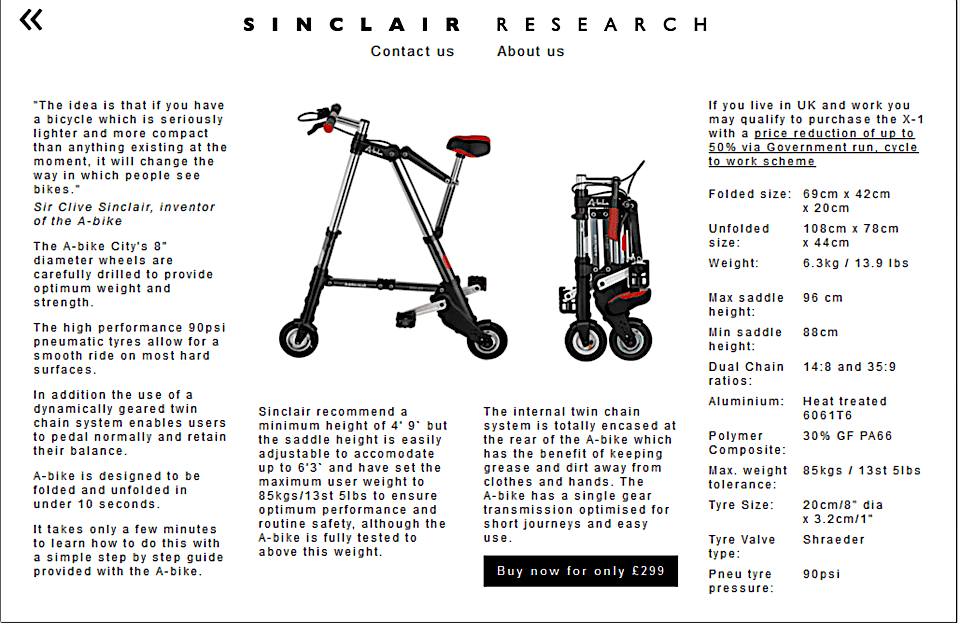 Markings on this specific bike

There were a few distinct markings that proved its authenticity:

This bike had its issues. Some of which were likely “overlooked” when the listing was posted. The first and most severe was the deflated rear tire. As I would find out, this was due to the completely split inner tube! Luckily the tire size is standard for scooters and large wheeled baby-strollers so finding a replacement on AliExpress / eBay was easy.

Next, there was the non-functioning rear brake. This was easy to fix since all that was missing were the bolts to hold the brake band to the fiber-glass reinforced polycarbonate frame. Once the correct bolts and nuts were found, the brake was easily adjusted and brought up from “not-working” to merely “works but is awful” status.

Replacing the rear tube was quite a feat that involved disassembling the entire gearbox! While it’s clear that I had lots of fun doing this, it would have been an absolute nightmare for anyone actually depending on this bike as part of any kind of real travel. You can see the extreme gear ratio multiplication in the design.

The bottom bracket (if you can call it that) is actually a spindle with 2 bearings resting inside the frame and has a ratched freewheel of 16 teeth. This is linked to a second (fixed) chainring of 36 teeth, which is finally driving the fixed sprocket on the rear wheel of 9 teeth. Altogether, this is an effective gear ratio of

A gear ratio that would be insane for any bike without 6 inch wheels!

Sadly, the handlebar grips were falling apart as well. The rubberized plastic they were made from had deteriorated to oblivion over the course of many years. I hacked off the sticky, rotten grips and put on some iridescent bar tape; more pleasing to the eye.

The A-Bike takes up very little room, and that is its main and likely only advantage. As an N+1 weird-bike it definitely turns heads and is fun to ride for very short distances. There would be no joy in riding it the way I’ve ridden my Pacific CarryMe. The extra 2 inches of diameter per wheel as well as overall design simply outclass this A-Bike in every practical measure of success as a bicycle (vs as a design item you keep on a shelf).

The A-Bike design had its heyday in the mid-2000s to mid-2010s, after which the original manufacturers and distributors quickly shut down operations on this peculiar design. Many clones are still being made today as export items, mainly from China but these are generally inferior in terms of material longevity and physical tolerance.