Jersey is the largest of the Channel Islands, located in the English Channel between England and France (but closer to France). As a dependency, but not formally a part of the United Kingdom, it has a mix of British and French cultures. With both English, and French being official languages, it was the only place outside of Canada I’ve travelled to with this specific combination of dual language road signage! It’s well known for its beaches, cuisine, historic fortifications, and offshore financial services.

The return flight was exceptionally cheap when I looked in late September for end of summer mini-vacations. I did some basic research about the late summer / early fall climate as well as the terrain and roads there. I concluded that the Pacific CarryMe was the perfect bike for this brief holiday since Jersey roads were in much better condition (vs. Manchester). Furthermore, the hilly terrain of the interior plus the shrunken scale of everything on the island meant that covering too much ground could wear down the variety of my experiences there before the end of the trip.

The Pacific CarryMe came with a protective travel bag which can be slung over the shoulder and packs down nicely to fit into a backpack when not in use; perfect for leaving the bike in as airline hold luggage.

Landing on the island

My stay on Jersey was for 4 nights, arriving shortly before noon on the first day. Luckily, the island greeted with total sunshine and dry weather for my entire time there. Days averaged 24C, with the temperature dropping to 17C at night.

As my arrival flight was landing on the island, it dawned on me exactly how small it was. And shortly after this realization, I decided I would not use any other means of getting around other than walking or riding the CarryMe; it really was that small. 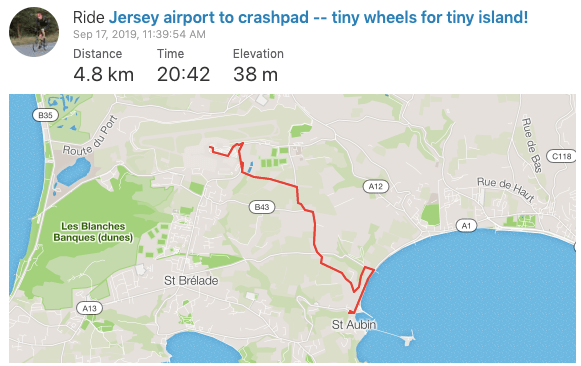 Exiting the airport, quickly unpacked the CarryMe and set off to where I was staying on the island. It took a mere 15 minutes to cycle there from the exit doors of the terminal building. After grabbing a quick bite at the cafe across the street, I was off on the CarryMe to make the most of the day-light. 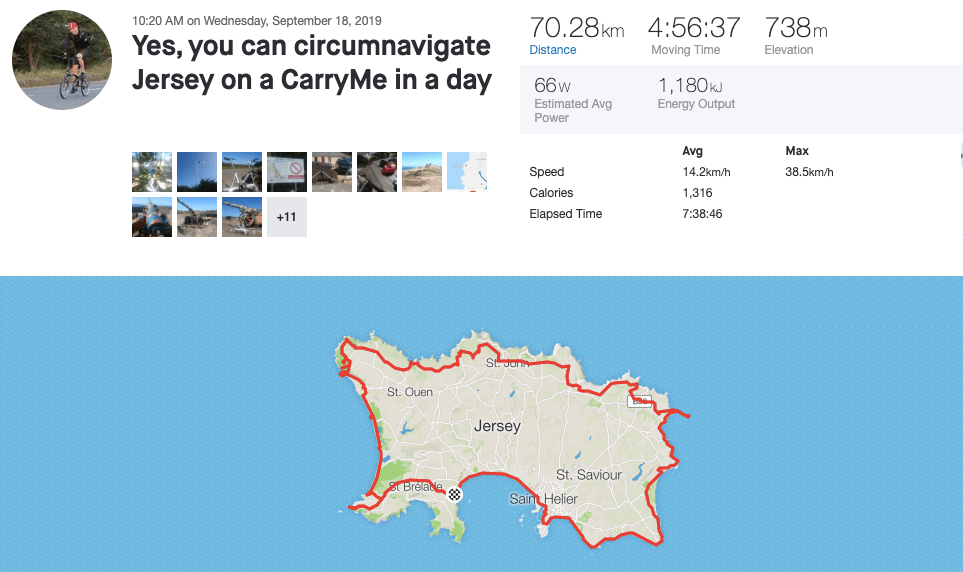 Needless to say, I absolutely had to attempt going around the entire island at a leisurely pace, while still making a good time. It proved a lot easier than expected. The cafe stops were plentiful and relatively cheap. Here are some photo highlights from the circumnavigation:

The roads were excellent quality, owing to the lack of heavy vehicle traffic regularly seen in UK cities. The drivers were quite patient and behaved safely – driving is absolutely a luxury when you live in a place this small. All that said, I wouldn’t hesitate to bring my family for a ride around Jersey given this experience.

As a solo traveller this time, it must be said that the CarryMe performed beautifully with minimal hassle at the airport, and exceptional hill-taking ability during my time on the island; a great trip with an excellent bike.