The result so far

Here’s a video demo of I was able to achieve with this reverse engineering effort:

About a week ago I was having a look at some new input devices to use for my game experiments that were a little more interesting than a simple USB or Bluetooth Gamepad. As I kept a close eye on consumer VR technology in 2016/2017, it occurred to me now that many of the devices released in the past year have been updated and on the market for at least a few months. Google Daydream had been out since November 2016, sold with a packed-in controller, and the Gear VR received a similar 3 degrees of freedom (3DOF) controller in April 2017.

Being the first to market, the Daydream controller was already (1) reverse (2) engineered (3). It wouldn’t take much to use it as an input for my game ideas.

However, there were clear hardware design disadvantages versus the Gear VR controller:

Moreover, it was not sold separately, which meant a seller on Amazon, eBay, or other marketplace would be incentivized to sell the headset and the controller together as a whole package rather than split the devices.

The Gear VR Controller used standard AAA batteries and was better designed ergonomically; I found an Amazon Warehouse Deals listing that sold the controller only for £20. Shipped the same day, it arrived in less than a week. Praise modern logistics!

After unboxing the device, the first thing I tried doing was pairing it with my laptop. No dice. The device didn’t even show up in the macOS Bluetooth menu in System Preferences. Have to try something else.

I sought out several freeware Bluetooth LE (BTLE) explorer apps and ended up using LightBlue Bluetooth Device Discovery. This app picked it up straight away. 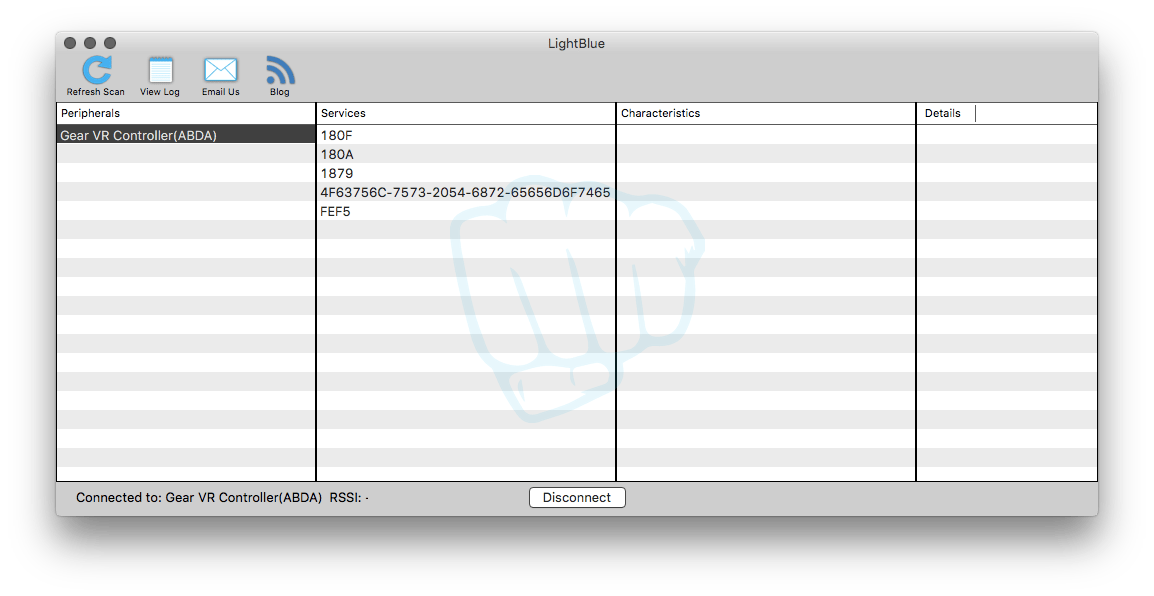 There was an unusual quirk, however, the cause of which I didn’t manage to fully figure out. Occasionally, the controller would break the Bluetooth connection as it entered its sleep mode. Once re-awakened, any attempt to pair with it again would cause it to toggle rapidly between being paired and unpaired.

The only solution I found for this was to manually remove the device profile from the Bluetooth device list every time this happened so it could formally pair again.

I had little prior experience using Bluetooth devices at this level so I had to read up on how the whole BTLE tech stack is meant to work.

My goal was simple: use the Gear VR controller outside of the Gear VR apps and without other hardware.

I was able to map out all of the services and characteristics of the controller very quickly. The next step was trying to figure out what they did and how to use them.

Using LightBlue and a little bit of help from bluetooth.com, we can see that services 180F and 180A are the Battery Service and Device Information Service, respectively.

The other services were non-standard, and a search for those UUIDs (e.g. 4F63756C-7573-2054-6872-65656D6F7465) turned up very little. I did try searching for other reverse engineering efforts on GitHub and found a wiki page indicating that FEF5 was possibly a service used for firmware updates. No doubt a skilled person with more interest in this area will figure it.

Thankfully, retrieving, decompiling, and debugging APK (Android Package Kit) files are all tasks that are well supported and documented within the Android ecosystem. It was sensible to look in that direction next.

Gear VR games make use of the controller’s readings through a service that translates raw Inertial Measurement Unit (IMU) data into something that a game developer is more likely to use: orientation, touchpad position, and which key presses are happening at any given moment. For common input devices like keyboards and mice, this step is handled by the OS, usually using the HID protocol. The Gear VR controller, however, is custom hardware and we can assume the Samsung Gear VR platform developers had to write their own service.

If we peek inside this service, we might be able to figure out how they talk to the Gear VR controller over BTLE and re-implement this mechanism wherever we want! I found the APK for the input service after scanning through some Gear VR threads on forums.xda-developers.com.

You can open up the APK in a variety of ways:

You can also extract strings from some of the files inside the APK. This is a great way to scout for particularly helpful debug messages; doing that can quickly tell you if the package has relevant functionality.

For instance, I found the string com.samsung.android.hmt.vrsystem to be particularly interesting: what does HMT stand for? Thanks to a sharp-eyed fellow Redditor, we now know it is Samsung’s internal codename for the Gear VR system: Head Mounted Theater.

What was more interesting were strings like the one below, which confirmed this is where we should look for further progress toward the goal.

Next, I extracted the APK as a ZIP (first option) and then used the classes.dex file (contains all the compiled Java classes) within the APK with dex2jar. Doing this lets allows me to use a Java class decompiler (JD-GUI) to drill deeper into code that’s a little more human-readable. 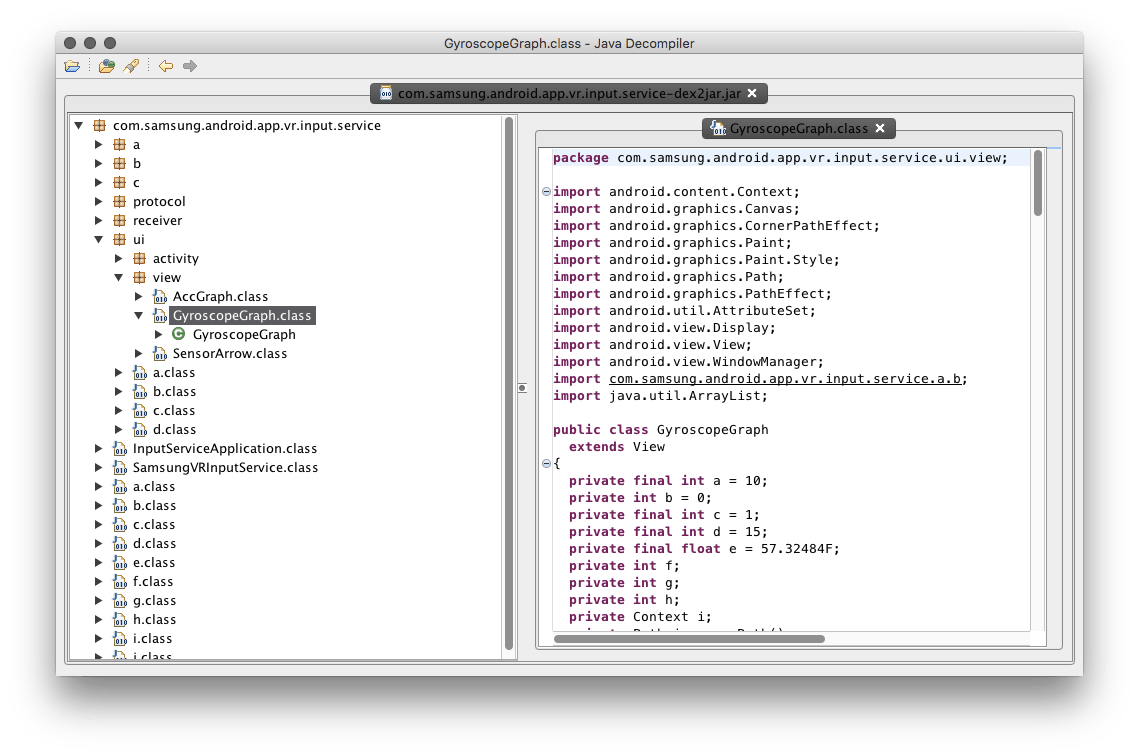 This is starting to look more intelligible! We can go through everything to understand what the classes do and how they all fit together.

With some patience and time, a few modules were identified.

The first one was the part that handled trusted updated. It was easy to recognize since there were many strings inside this module that made reference to certificates and the names of the hardware manufacturers.

Also found inside the decompiled resources were two X.509 certs that contain public keys for verifying that downloaded software updates are coming from either Samsung or Occulus. Out of curiosity, I got the certificate information using:

The second module to be identified included code to handle third-party libraries used by the app.

Its overall purpose may be inferred from “MSM”, which could be “Media State Machine”? It decodes byte arrays received as data from the controller and provides the interface defined by

Firstly, the little-endian hex strings within package "a" are of special note since these are the commands sent to the controller.

Next, we find that a.class shows

In the meantime, I found another reverse engineering attempt for the Gear VR controller which used exactly one of these commands on the COMMAND SEND characteristic to tell the controller to begin sending data. I tried sending these commands with LightBlue and it worked great!

Here are all the commands:

At this point, I started writing a Web Bluetooth script to make the data inspection easier and more fine-tuned to the information I should be expecting to get back from the device.

This class had a lot of debug strings in it, include the previously scouted accelerometer debug string. It contained nearly all the bit-masks and logic needed to get the correct controller event data. Being cautious of little-endian byte order and the float, short, and int size differences (and associated typecasts) between Java and Javascript, it was a matter of simple translation to re-implement the decompiled code in JS using Web Bluetooth to send data and parse the received data.

As I was playing more with the data, I found it helpful to write a histogram for the accumulated entropy of the bytes that were coming back to see where in the byte arrays I should be looking to verify that each byte was being read from the correct index. 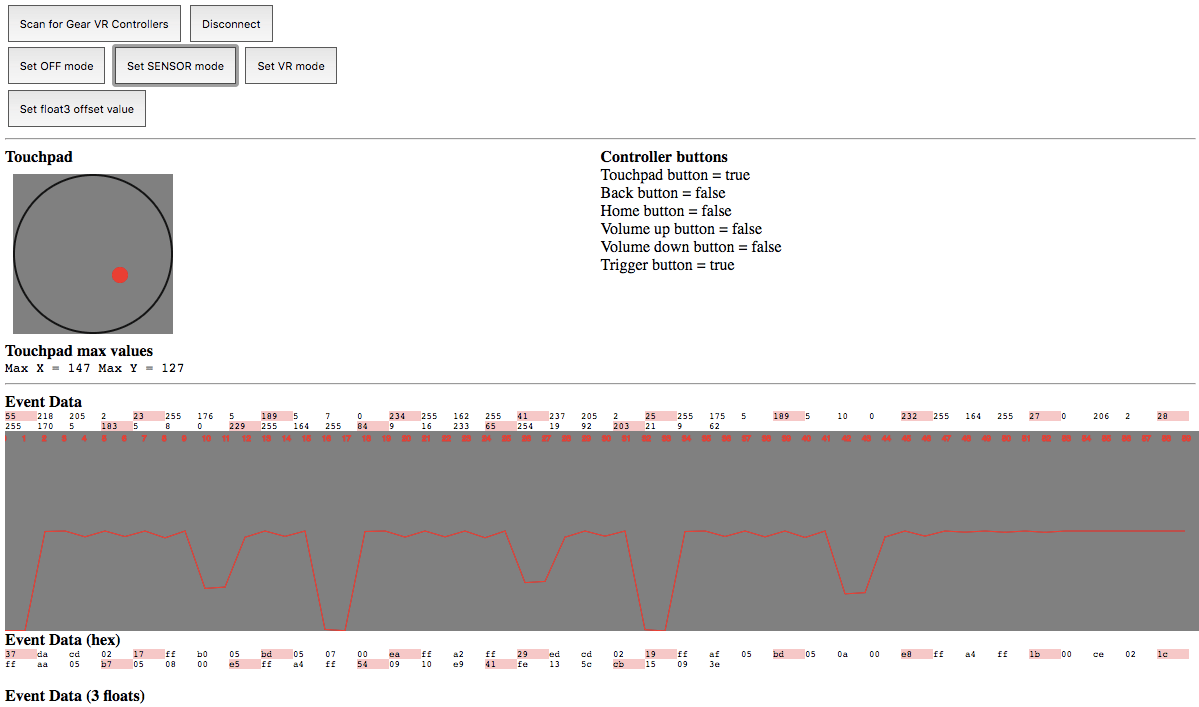 As you can see, the troughs in the graph clearly delineate the order and structure of the bytes when the controller is waved around. Having this extra tool while I was playing with the byte arrays made life so much easier. Eventually, I figured out enough of the data to attempt using it in a 3D context.

Unfortunately, unlike the Google Daydream controller, the Gear VR controller does not seem to do sensor fusion on the device itself, which means we have to do it in software in order to get the actual orientation values (e.g. pitch, yaw, roll or other rotations) that we care about as game developers.

There are two major open-source sensor fusion filter for IMUs that people seem to be using: Mahony and Madgwick. Each has its own biases and characteristics. To my knowledge the key difference is that the Madgwick sensor fusion algorithm will use magnetometer readings to compensate for drift. Therefore it is extra-important to calibrate the magnetometer.

I made a rough attempt at tweaking the values for sensor fusion; it’s still far from perfect. Perhaps I’ll be able to take that further in a later attempt. There is a calibration mode that I still haven’t explored. The answer may yet lie in there.

This project gave me a cursory understanding of how sensor fusion and IMUs work and how the Bluetooth stack works. In regards to pre-existing reverse engineering efforts, I learned how critical it is to always use primary sources (such as the decompiled code) as the first step for figuring something out.

If you have to use shortcuts, verify you understand what the shortcut is doing fully and verify that it’s making all the correct assumptions. Assuming somebody else’s work is correct is an expensive risk time-wise.

If you use Chrome and have a Gear VR controller handy, you can try the demo below:

I couldn’t resist a teardown of the hardware.