Life gets boring sometimes when you do the same thing over and over again by yourself. Two weeks ago, I had an epiphany: I didn’t have to do the same thing by myself if there were people I could coax into doing it with me. Must have been what I’d missed out on all this time.

Finding people was easy enough: I scrounged 30 seconds of my day and put up a Facebook status update.

Luckily, some friends fell for the bait almost immediately. I contacted these upstanding citizens and thinned down the list to whoever would be available soonest.

There was about a week of pre-planning involved in this project. We started a measly scrap of a Google Doc and turned it into a kaleidoscope of schedules, tasks and game mechanics. It felt wise to ensure as smooth a start as possible. If we could make that happen, we’d have an incredible amount of creative momentum.

The resulting high level plan boiled down to using these technologies in our game:

Move fast, break all the things

A classic slogan in the world of tech. Boy, did things break. Haxe turned out to be a poor choice of tech for a few reasons:

Inevitably, we gave up trying to use this new language to write the game and switched to HTML5. No time was wasted trying to port the existing code over. Having devices ready for testing made this a confident decision and we enthusiastically wiped the slate clean.

A clever idea came out of some brainstorming we’d done on the first night of the gamedev: combine the player’s attack with the player’s movement. With this key mechanic and the newly programmed collision detection for game objects, we whipped out a mini-game in about 8 hours time. Defend yourself from an onslaught of enemies in a top-down view reminiscent of Crimsonland.

The player has to steer his character and shoot wrenches at enemies simultaneously. When the enemies touch you they wear down your health and you slowly die. Enemies spawn faster as time goes on. An ‘enemies killed’ counter keeps track of how many heads you’ve bashed in with your infinite supply of airborne wrenches.

I did most of the core engine coding, while Hesam tweaked the game balance and feel. This combination worked quite well since it meant there were fewer low level conflicts whenever any part of the game had to be changed. And about 9 hours later, we had a working build of the game that ran on both the Android tablet and the iPad. 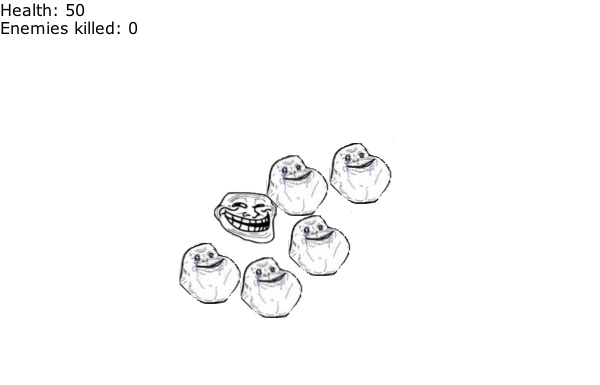 Where do we go from here?

We may reuse some of this code to refine the game idea into something more complete, though the experience of team-based game dev will have to suffice for now. As brutal as this event had started out, it was a miracle we got anything working at all. For our first taste of collaborative creation, we were very pleased with what we had at the end of 48 hours. Sunday brunch solidified that rewarding feeling in food form.