This post is a Celestial Combat devlog and also be found here.

Writing code is a necessary evil to get things done on a project and often the best kind of code is no code at all. Good tooling helps us do things:

CelCom exclusively uses vector graphics, which is one of the simplest and most space-efficient ways to represent art in a game. Using vector graphics is a trade off in favor of using more CPU for less disk space. Vectors also don’t lose resolution after scaling.

All art in CelCom is expressed as polygons: arrays of points in sequential order. For example, a simple triangle is [ [0,0], [8,0], [0,8], [0,0] ]. As you might imagine, art that’s even a little bit more sophisticated would be very tedious to code by hand. If we want to easily add to and iterate our game art we need an editor that the artist can draw inside and use to export to our game-native vector format.

The geometry editor tool was created to do this. It can also be run locally:

The editor can create layers of polygons with an infinite undo history. See LETTERS within src/client/constants.ts for an example of the output. Further tweaks to the resulting coordinate arrays is possible with the simple helper function transformPolygon() inside src/client/Geometry.ts. 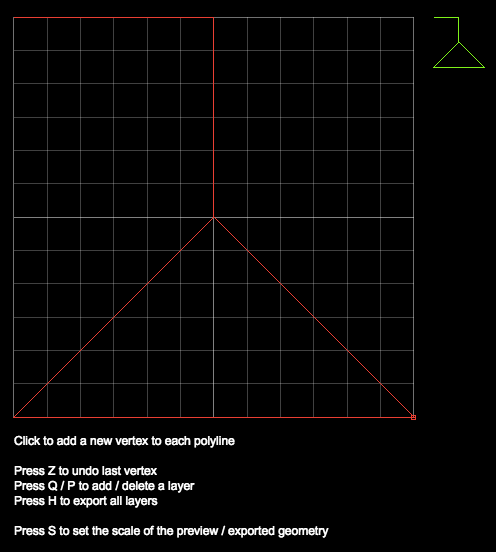 Previously the project used Webpack to create a single client-side JS file that would minimize the number of network requests as well as total load time. As of 2018, webpack is the standard bundler for many JS projects.

It has a vast collection of plugins for configuring and transforming code and assets. This is also its main downside: you need to configure these plugins individually and orchestrate them. The level of effort required for the initial setup and continued maintenance (if you want it to build more things / more types of things) is sizable.

Eventually, some people got sick of doing that and proposed a better approach: avoiding as much as config as possible while achieving the same purpose of compiling client-side resources.

ParcelJS is one such alternative to the config hell that many webpack projects become. It began a trend of thought for build tools in 2018 that quickly gained momentum. You install a single dependency for the bundler, point it to an entry point for each bundle / resource to produce and it takes care of the rest. Plugins are automatically installed when required, allowing the developer to focus more of their time on building features vs messing with the compilation toolchain.

Switching over to [Parcel] vs Webpack caused:

The timings above were gathered from running the bundlers on my 2013 Macbook Air. Parcel is the clear winner here. It is not completely perfect however, some things that were straightforward in Webpack need clever workarounds / new ways of thinking with Parcel:

Parcel can also be huge in terms of number of its child dependencies within node_modules/, whereas this is limited with Webpack (being explicitly defined). Not really a major concern for people not developing on limited spec environments. Finally, the experimental scope hoisting functionality did not work well on this project owing to Parcel’s lack of maturity. It created super-minified builds that did not work.

Not quite “zero-config” but much closer than before!

Hosting CelCom is provided by GitHub Pages: each commit into the master branch of the git repository publishes the codebase as a statically served website hosted on GitHub CDNs. This means publishing things is simple:

All we need to do to see which builds a client is receiving is to create a readily visible build tag that has the timestamp of build and the commit it built from. We use the .env approach here offered by Parcel and regenerate it for each production build via scripts/generateDotEnv.js Example: